This is both a simple, and overly complex project.  It is simple in that I have made a set of pine boxes with glued on plywood bottoms.  Had I been only interested in making them functional, I could have finished these in an hour or two.  Instead, I wanted to practice hand cut dovetails, and make them look good.

If you want to make basic boxes to hold canning supplies, then cut the boards and attach via whatever method you like.  Screw/glue, pocket holes, nail, half lap etc…  1×6 boards are the perfect size for pint cans.  Remember they are actually 0.75×5.5″.  Cut them so the outside dimensions end up being 11×14.5″, and attach a plywood bottom.  1/4″ plywood seems adequate.  It took me a number of hours to finish the two crates, but the experience was worth it. 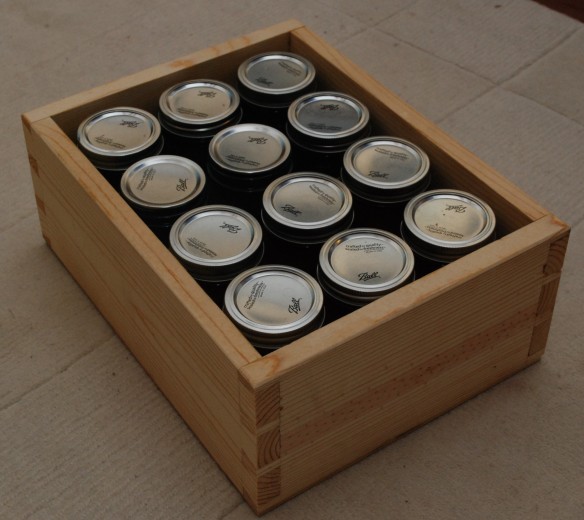 If you are crazy like me and want to make basic utilitarian boxes with super fancy joints, then read on.  Or if you just want to see how I make dovetails.  There are a lot of good resources out there that detail how to make dovetails.  I am going to give a brief overview of how I do it now.  Maybe in a few years when I get good at them I will make another post with some sage advice.

There were 8 joints total.  Most of them turned out decently, but not GREAT.  Practice will help out, but I think pine might be hard to work with.  I will have to try making dovetails in a harder wood to see what the results are like. 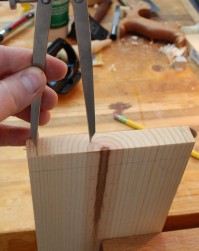 I use a divider to layout the tails

Remove waist with a coping saw

Use completed tail board to mark pins

Ready for glue up 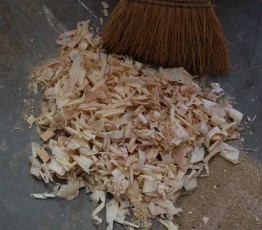 It was a good day!

For further adventures in hand cut woodworking I will need a shooting board.  If you don’t know what one is, the use will become clear soon.  After my miter box debacle I should have gone simple for a shooting board.  I didn’t.  My first attempt had an adjustable and removable stop cleat on top with hand cut grooves and yada yada.  It didn’t work well.  I backed up and thought simple and short term.

A shooting board lets you place a low angle jack plane (good for cutting end grain) on its side while holding a board to be trimmed square against a backer fence.  The plane runs across the end grain taking tiny shavings as it goes.  I attached two pieces of 3/4″ plywood to each other allowing a two inch strip on the right for the plane.  Then, at a 90 degree angle to the plane running slot I attached a stop fence.

Here it is with a scrap pine board being trimmed.  The plane is my new No 62 woodriver low angle plane. 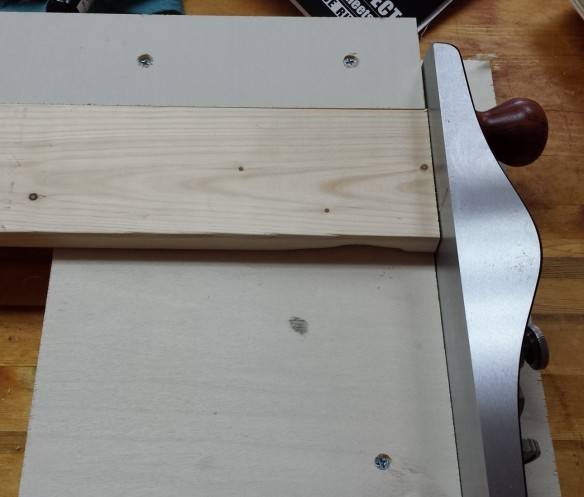 As you push the plane forward, it cuts off tiny shavings from the end grain.  If the original cut wasnt perfectly square, the shooting board should fix it.  Also, It makes the end grain finish look much nicer than any saw could.

The top piece of pine was saw cut, the bottom was cleaned up with the shooting board.  I will have to monitor the squareness of the fence.  If it wonders over time, that will introduce errors into my work.  Until then, this one works well.  So well, I had enough time to start some dovetail practice parts.

TADA!  My first hand cut dovetail.  I needs some cosmetic help, but holds well and is a really sturdy joint.  I will post more details once I have been through a pile of them and have a more solid procedure.  The shooting board did a good job of squaring up the pine and giving me a workable surface.