I recently bought an iPad for use during travel and for things around the house.  One such thing is for use as a recipe holder while I cook.  I have slowly been collecting my various scraps of paper and bookmarks into an organized google drive collection.  Most fit nicely on a single page in portrait mode.  I needed a way to prop it upright and started with a nice swoopy 3D printed part.  I liked the shape, but it was a little too light and the color clashed with my kitchen.

Unusual for me, I built a test piece first.  Typically I just launch into this sort of thing head first and start making mistakes.  The pine shape was made using the green 3D print as a tracing template.  I liked how it came out and proceeded with maple.

As I was cutting the groove on my router I made a huge mistake.  I wanted to rout the groove a little wider, and moved the fence closer to the bit to make a second pass.  CHOMP!

I forgot, when I moved the fence closer I used the wrong side of the bit.  When pinched between the fence and bit, the bit bites in and drags everything forward.  I made a little graphic below to show the issue.  The bit rotates counter-clockwise.  Keep out of the red zone and use the green side.

I recovered by starting over and moving on to a new piece of wood.  This time without any issues.

Once I got the groove completed I tapered the back a little.  It doesn’t need to be 3/4″ thick all the way across, so I thinned the back end down.  I like the effect a lot, but in retrospect I could have gotten a lot more aggressive.

With the tapering done I used the green printed part as a template to lay out the two curved cutouts of this part.  I made the center cut wide enough to help lighten the look, and provide a cutout around the speaker ports at the bottom edge of the iPad.  I was able to orient the front to show off some lovely rays (little speckles in right hand picture) in the maple.

I am really happy with this, a past version of me would have cut the groove and called it good.  The block would have been functional, but chunky and brutal.  This is lighter and more elegant.  Truth be told I could have done more lightening and still had a functional part, but as always it is a learning-by-doing experience.  A spray coat of lacquer sealed the deal.

I have a trusty little 3 step Werner ladder that is great for doing work inside and outside the house.  It is small, light and provides enough height to be really useful without making you feel too high up.  I bought it when I got my house 8 years ago and have used it a lot since then.

The back two legs are basically straight tubes with rubber feet slipped on.  They did a good job keeping the ladder stable and level, but over the years the posts have pushed through the rubber.  The final straw was when I was doing something in the yard and the bag legs sank 6 inches down.

I pulled the feet off and tried to salvage them.  The only real issue is the bars pushing through.  Maybe “re-soleing’ these shoes is all it takes.  I tried screwing down some plywood to the bottom, but ran into issues.  The post is only resting on its edge, and the squishiness of the feet means they want to wobble around a lot.  No good.

Time to ditch these feet and go with something new.  I would try to make it all in wood, but the post diameter is not close to any standard drill bits.  I want the new feet to fit tightly.  On to 3D printing! 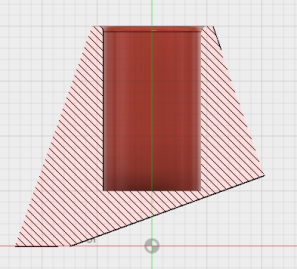 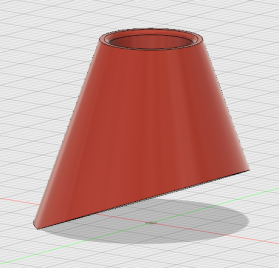 The foot design resembles the original rubbery version.  The difference is that these will be hard.  I added a flat parallel to the bottom of the post.  The reason being is that when you fold the ladder up it only sits on the tips of these feet.  Probably a lot of the reason they pushed through.  This flat spot will help spread the load when stored and hopefully help it last longer.  The larger flat in the upper left picture is what touches the ground when the ladder is deployed and in use. 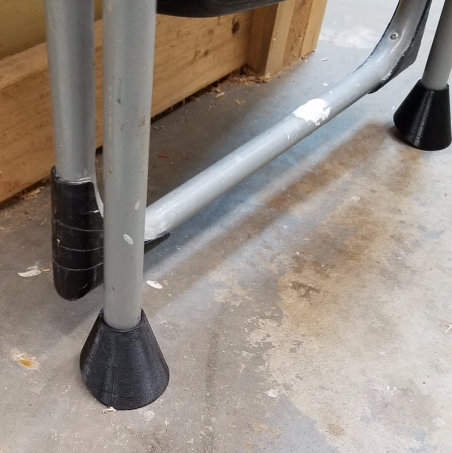 I started with basic PLA, as a test, but they fit so well I am going to stick with the first prototypes.  I might make a higher infill PETG version in the future.  Until then the ladder folds up and stores well, and most importantly sits flat and stable when in use.