Our collection of pepper and tomato plants were starting to have a problem.  The tabasco plant was rapidly declining, and some of the other peppers had a burnt look to them.  After asking around we decided to move them from the front to the back.  Our front receives full sun from mid day on.  The back is filtered by some oak trees early on, full in the mid day, then house sheltered in the afternoon.  The results have been better, the plants look less withered when I go to water every afternoon. 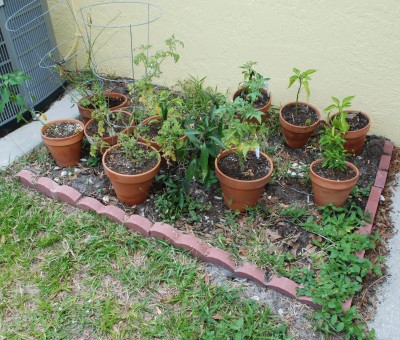 Honestly our little back garden area doesn’t look great.  We have made a few attempts at growing thins in there, but none have succeeded.  Many of the better gardeners in the area seem to forgo in ground planting for raised beds.  I guess our soil sucks for most things.  Lets try a raised bed.  The brick edgers came out and weed screen went down.  It worked out, we put screen around and behind the AC unit, and poured lava rock on it.  It needs more rock, but this should keep the grass from going too crazy back there. 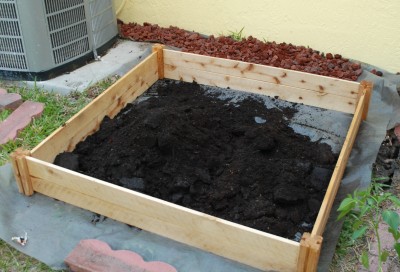 Lowe’s had garden soil on sale for 2 bucks a cubic foot, and HD had the cedar raised bed thing for 10 bucks off!  I put in two bags of compost for good measure along with the soil.  After some jockeying we got all our various tomatoes, peppers, and a few new vegetables in.  Any more plants and we will need to build another one of these units. 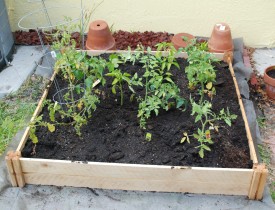 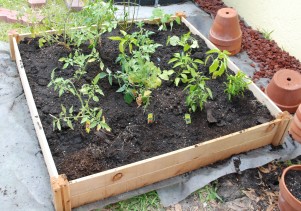 I am leaving the screen too wide until everything settles.  In retrospect I should have run it up the insides of the cedar.  Oh well, that is what next time is for!  Until then hopefully our plants thrive and we get more of those awesome little tomatoes the one bush was giving us.