I have been watching a show recently called “Forged in Fire”.  It is a bladesmithing competition reality show that is very much worth watching.  Everyone in it is skilled and helpful and most of the knives and swords produced are works of art.  One episode in particular piqued my interest in the Kukri.  It is sort of a hacking weapon like a machete or short sword, but has a big belly on it for chopping.  It has been used by the Nepali solders (Gurkhas) for ages, and they dismembered enough British solders with them in the early 19th century that the fighters and their swords grew quite a reputation.

As it would happen a coworker turned me onto a site that bought a Nepali palace’s entire armory.  There was stuff stored in there from all different ages that never got used.  This included 19th century Kukris that were packed in grease and forgotten.  A good friend and I went in together to purchase two and restore them.

100+ years has left them pretty pitted in places, but over all in decent shape considering the age.  The one picture shows a greasy thumb print from someone handling them before they went into storage. 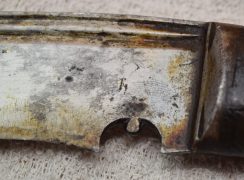 Our first job was to cut through a lot of the remaining grease and gunk.  WD40 and steel wool got through with a lot of elbow grease.

The staining was deep and didn’t come up with steel wool so I moved on to a brass wire wheel on my bench grinder.  It was slow work, but after a while you could see a lot of the pitting cleaned up and the staining faded.

We switched from the brass wheel to a buffing wheel with coarse emory polishing compound.  It helped the luster, but didn’t do much to the remaining staining.  Maybe a heavy sanding is what we needed to start with.  They aren’t polished to a mirror finish, but neither is the surface completely dull.  The letter on the spine looks great.

My blade had a decent chip taken out of the center of the belly.  I spent some time on the bench grinder trying to grind past it.  I got part of the way there, but didn’t want to dramatically change the shape of the blade.  I am not an expert in this.  Both went to my work sharp belt grinder to get a battle ready edge.

Now to test them.  You can’t just refinish a blade like this and not put it to good (bad?) use.  It is time to make some fruit suffer!  I picked up a watermelon and some coconuts just for this test.  Pictures don’t do it justice, so we shot some video.