I have been doing kettlebell and bodyweight exercises consistently for over 6 months.  I love the speed at which it kicks my butt and have been getting progressively stronger at all the exercises.  Aside from a variety of bells none of it requires anything more than a small bit of space.  The two exceptions are pull-ups and Turkish get ups.  Pull-ups obviously require some kind of bar, and Turkish get ups involve large series of steps to take you from lying flat on your back to standing up straight with a kettlebell overhead.  It takes a bit of room.

The plan is to kick out my treadmill and build a dedicated kettlebell workout area.  I have a doorframe pull-up bar, but want to build a freestanding piece of equipment.  Might as well use this as a chance to do some woodworking.  Start with some nice (Super rough!) untreated 4x4s and get cutting.  Even though they were supposed to be kiln dried they were wet enough that my normal tenon saw bound up an inch or two in.  Had to break out a panel rip saw! 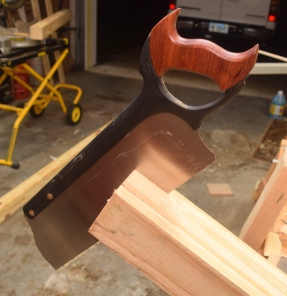 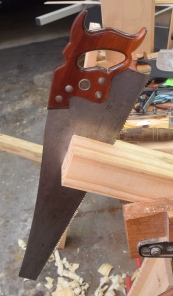 With guns that big my joints weren’t exactly surgically precise.  Along those lines I didn’t really have the right chisels for the job.  An old 2″ framing chisel helped, but my only other option was a 1″ bench chisel for chopping the waste out.  Still I was able to bang out some bridle joints to attach the upgrights to the feet.  Things were going swimingly enough I was able to shoot a little assembly vid! 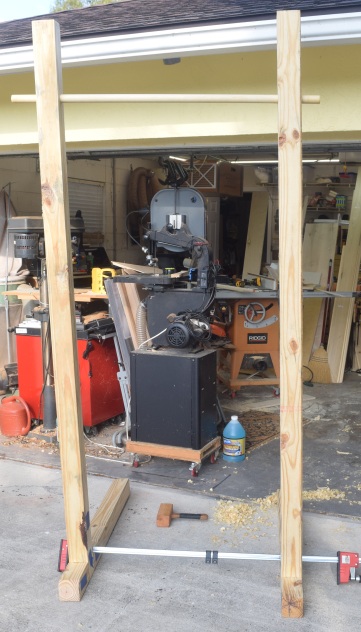 Before doing any glueups or serious trimming I assembled the uprights with the pull up bar at the height I thought appropriate.  This let me do some basic testing to see if I was on the right track.  It was shaky, but even without glue or fasteners it held me!  Last but not least it let me play with different widths to figure out what was right for me. 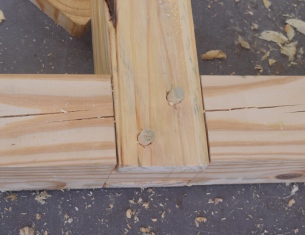 I started trimming excess and planning out the rest of my parts.  A shelf across the back holds kettlebells when not in use.  The shelf is dovetailed so it helps keep the assembly square.  All that weight comes in a lot of handy!  The right angle joints between the uprights and the feet got glued and pinned for good measure.  Everything else is going to stay friction only so it can be disassembled.

I tried trimming everything down as much as possible so it wouldn’t take up any extra space inside.  It looks compact, but beefy. 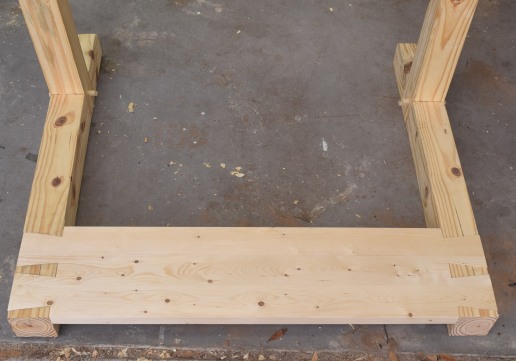 I made one critical flaw though.  Those pins on the backside are pretty thin, and any force on them by the tails puts a lot of shear force along the grain.  It is a recipe for splitsville.

Yup, I was doing some assembly and it popped off.  I tried gluing and pinning it back in, but only managed to destroy the piece.  If I had made the foot extend a few more inches past the tail it would have been strong enough to survive.  Lesson for next time.

I installed some angled pegs along the back of the uprights to give myself storage hooks for grip trainers and other items.  The whole thing goes into the house easily, and assembles in a few minutes.  The pull up bar itself was pinned with some 1/2″ dowels though the upright from front to back.  That will keep it from rolling or working its way out.  The shelf and those pins are just held in with friction and gravity.  Assembled the device is too big to get through any doors, but by using carefully planned joints, I can take it apart to get it in and out of the house.  A coat of boiled linseed oil offers some protection and adds color to the pine. 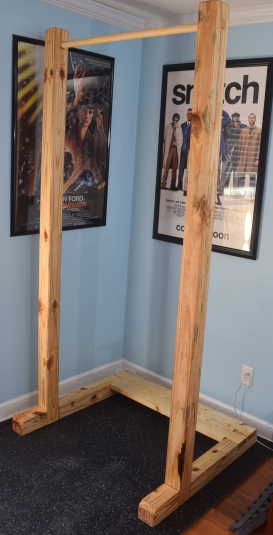 All the wooden joints creak and groan and shift a bit when doing pullups, but it is super sturdy.  I might drill out the pull up bar and upgrade from a 1-1/4″ to a 1-1/2″ bar at some point, but for now this works well.  Those pegs along the back hold my chalk, a towel, and grip trainers.