I made a quick feeder for the new buns in kind of a rush and without a lot of research.  It was a shallow 3 sided box with vertical dowels to hold the hay in across the front.  The dowel spacing was bad.  First it was hard to get their heads in because it was too narrow, then when I removed a few dowels it was too wide.  They tended to pull a ton of the hay out into their box.

A solid box with two holes is the right way to go.  I used some 1×12 pine to give a nice tall body.  I wanted to engrave a bunny silhouette and the words “Chow Time” on the front.  Unfortunately I didn’t center the piece well and my CNC hit a hard limit.  It got to the “h” and I knew the rest would be ruined.  So skip the words and make the bunny bigger instead.  Had it gone well I would have taken the time to do some color inlay.  oh well, next hay box. 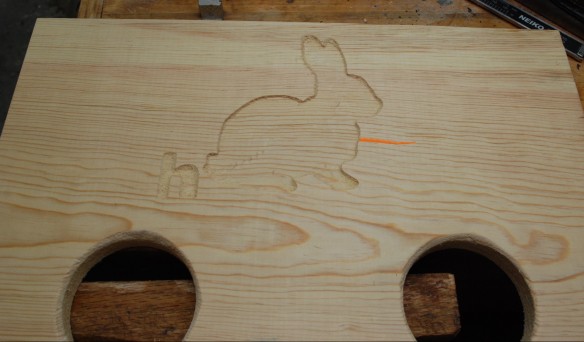 I assembled the front with sides and a back to make a box with no top or bottom.  Instead of a flat bottom I used a plane to put a rough angle on the two edges of a board.  Once installed at an angle it made the bottom ramp towards the two feed holes.

I installed it to the bunny fence set at a good height for their litter box.  There was going to be a lid, but I decided against it.  No reason really, just dump hay in when needed!  UPDATE: As it turns out, they can get inside.  A lid might not be a bad idea.

This box has a ton of capacity, and because of the smaller openings than my previous attempt they tend to pull a lot less into their litter box.  This means less filling and less waste.  They can often be found with their little faces stuffed in nomming on bits of hay.