Countersink bits are supremely useful.  Screws that are run flush look nicer, they are easier to install with the pilot hole, and are much less likely to split wood.  The set is from woodcraft and came in a plastic package.  It wasn’t useful for long term storage, and the simpler older set I had kind of rattles around in a drawer somewhere.  I wanted a better fate for this set, so I got to making a nice box for myself. 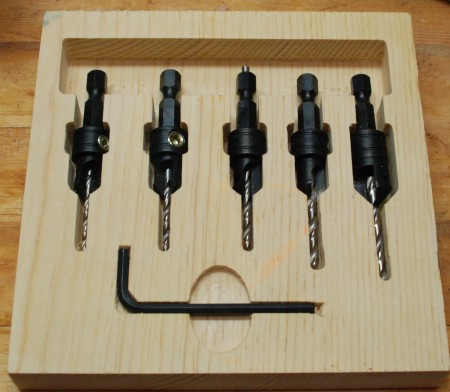 I started with a piece of pine in my mill.  I milled everything in the bit area to the same depth that would accommodate the thick ring with the set screw.  In retrospect I would mill multiple depths so the chuck posts don’t rattle around as much.  Nothing is going to fall out with the lid on, but it would have been nicer and rattled less.

I was thinking about milling some numbering in but It would have required a lot of cam work and careful milling to individually make each number.  Instead I used my punch set to put in corresponding numbers.  A fine black sharpie really makes them pop.  I did the sharpie before I spray lacquered the wood.  The marker bled a bit on the soft pine, doing it the other way around next time would be better. 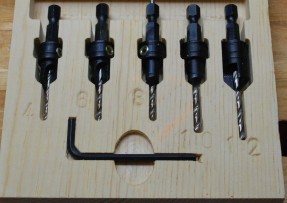 Next I milled a label into the lid and used some acrylic infill to make it really pop.

Everything got a coating of spray lacquer as a protectant.  A simple set of brass hinges made it an official lid, and some magnets keep it closed.  In retrospect, having magnets below each bit would have made this a really snappy cool set.  I guess its not too late! 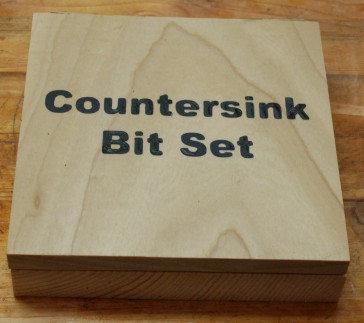 A co-worker I know is getting a tesla soon, so I figured he needed a nice coaster to go with it.  I was milling the day away, so why not?!  Also I am hoping this will get me a ride or two to lunch.