After months of being without a printer since the breakdown, I am back in business!

I was 99% sure that all it really needed was a new hot end.  Not sure what happened to the last one, but it would jam up no matter what I did.  Monoprice of course doesn’t sell new ones, and I didn’t want some cheap knock-off.  I didn’t realize it when I first had this problem, but it turns out E3D makes a “lite6” version of their famed V6 for half the price.  It can only do PLA and ABS, but that is all I ever wanted anyways.  Step one, remove old hot end with extreme prejudice.

I was able to reuse the heating element from the old system, but the thermistor is new.  This setup doesn’t have any part cooling fans so I bet the overhang performance will suffer dramatically, but at least it should work.

Some things that aren’t working out for me are power.  The old fan was 5V and got modulated by the micro-controller to change speeds for variable part cooling.  The new one is 12V and needs to be on all the time.  After some frustrating work with non-standard connectors, I ended up cutting out their connectors and directly wiring the given 12V supply to the machine with a power tap off for the hot end fan.  The fan power runs up the back, and the old 5V fan power just hangs out front.  I might use it to add a part cooling fan someday. 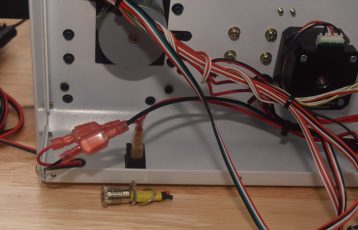 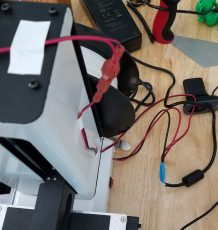 I learned a lot about how hot ends are made, and ended up having to completely replace the tubing on mine to get a full range of motion.  It is one ugly critter now.

Ugly, but working!  I made a few of these small 1/4″-20 nuts as test pieces, and they turned out all right.  This wounded beast should keep me going till I can get something better and more permanent.  No more trying to print 24/7 now, just the things that I really want… This might be harder than no printer at all!