Those food scientists and chemists jerky companies employ might actually be worth their salt.  I learned that salt is important to jerky, but it isn’t the only factor.  Something in the laundry list of unpronounceable ingredients really seals the deal flavor-wise, and makes ground beef jerky’s texture ideal.  I tried another few experiments with greater amounts of seasoning.  They turned out all right, but still nowhere near as good as some of the seasoning packs I have used before.  On the bright side, I am getting pretty good with my extrusion spiral. 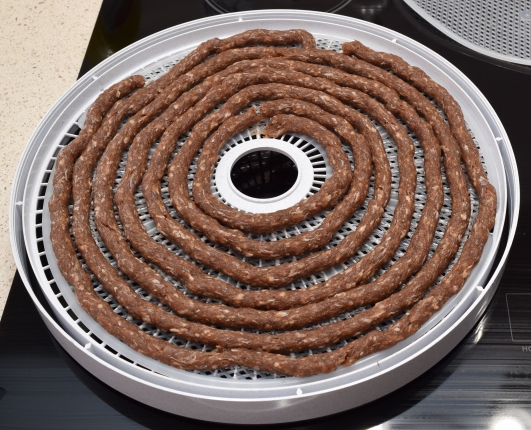 These last batches happened a week or so before Christmas.  I was really hoping to make something good, and replicate it once or twice for everyone as gifts.  It was a flop.  Probably going to start up again in the new year with a basic batch from one of the jerky companies.  Once I get my confidence back with a few rounds of decent jerky I can try adding to their seasonings, or maybe attempt to pick out which of their magic ingredients make such a big difference.  Until then, as Yoda says, failure can be the best teacher.