I was pretty despondent after my miserable failure with my own recipe.  I got cocky and flew too close to the sun.  What does that get ya?  Ruined jerky, that’s what!  I mentioned in my previous post that research seemed to indicate that salt content was very important.  While lean ground beef was still on sale I wanted to experiment with a very simple recipe and alter only the salt content.  I measured out carefully four 1 pound batches of meat.  Each got 1/4 tsp of cure, 1 tsp of garlic powder, 1oz water, a different amount of salt.  No flying high here, we are staying well grounded with this recipe.

Of the previous two recipes, the simpler one had roughly 1/2tsp of salt per pound.  It also had a ton of other ingredients which may have mucked up the results.  I started with a 1tsp of salt version and moved up in increments of a whole teaspoon.  The 4 tsp/lb version might be way too salty, but I would know the upper limit in that case.  I noticed when mixing the 1tsp batch that my gloves came back very clean (left picture), but the 2tsp version (right) started getting rather sticky.  Progress! 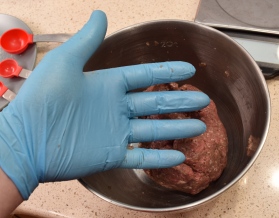 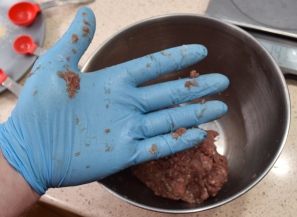 I continued mixing up batches going slowly and carefully so as not to miss anything.  I don’t currently time how long I mix up the meat, but a voice activated smart phone timer might have to be in order.  These 4 batches will go in the fridge for an overnight rest just like all my previous versions have.

The dehydrator load showed the difference again.  The lowest salt batch wouldn’t hold together (left), while the 2tsp (right) and above stayed continuous and made great spirals.

They all got the same trip through the dehydrator.  The results were quite different.  It is hard to see in the image below, but the 1tsp jerky is dry and crumbly like my previous batches.  The 2-4 tsp versions all came out pretty chewy and with a proper texture.  It seems 1-2 tsp per pound of meat is the required threshold.

I cut up each batch and bagged them with a number, leaving out batch 1.  I gave all my coworkers an opportunity to try them without comment and gathered feedback.  Most considered 4 too salty, though one guy really liked it.  It was kind of a toss up between 2 and 3 as to which one was more favorable.  2 was maybe a touch blander.  The 1tsp of garlic powder was very subtle, most didn’t detect it.

1 thought on “Exploring Salt In Jerky”