When I got my current 3D printer, I quickly upgraded the spool holder.  The original worked ok, but was a pain to load and adjust in width.  Every spool manufacturer has different widths to their spool.  The spool support I found on thingiverse was easy to adjust and load.  Eventually it had issues though.  The black threaded shafts that held the bearings in place started breaking off.  I installed 5/16″ bolts as a replacement.  Left photo was the original installation, right photo shows my bolt mod. 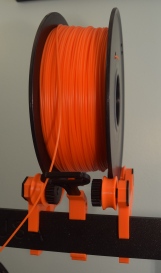 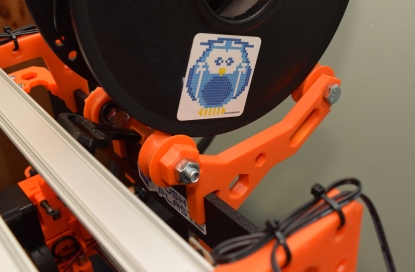 As those shafts failed they caused a lot of rolling resistance on the spool, and it ended up failing a few prints before I diagnosed the issue.  The bolts help, but there is a fundamental issue.  They hold the spool at the outer edge.  Any force imparted is a long distance from the axis of rotation.  If it were held in the center, then it would take a lot more resistance to induce the same torque.  That is how the original supports worked, so maybe they were on to something.  A diagram might help.

I heard Adam Savage give a good talk about how everything you try involves a lot of failure and trying again.  He was suggesting maker spaces nail to the wall (literally) the progression of projects to show that it takes effort and that nobody gets it right the first time.  I wanted to show some of my work on this one.

First I needed a way to hold the spools.  I decided a center hub (for reasons explained above) was best.  After measuring all my spools I set the outer lip just small enough to pass through the hubs, then made the center area a little smaller so the spool can’t walk off the hub.  Pressed in bearings mean it spins really effortlessly.  I had a bunch of red filament, so I started with that.  It was simple and worked right the first time.  So much for showing progression!  The next task took an extra try or 4.  I used jam nuts to hold the two spool halves (they are identical) together.  Don’t tighten the nuts against the hub, the bearings spin better without side loading.  To make handling easier I printed a handle with internal 5/16″ threads.  The first one was too short for my hand, so I cooked up a longer one.  The threaded rod goes 2.5″ into the handle.

This hub system will need some kind of support to keep it up high on the printer.  I took some measurements of the printer frame and started with a thick test piece to make sure it would clip on and be secure (far left).  I thought it was good enough and went forward with a full spool support (second from left).

This worked but was a little too thin and wobbly.  The odd rounded rectangle cutout is for my LED strip.  It was too close to where the spool will be.  I couldn’t have the light and spool installed at the same time.  Next I made a few minor adjustments to the frame clip and printed another test (middle).  That was more snug.  I moved the LED strip to a reasonable location and tried again (second from right).  I ran with this one for a week or two and liked the results.  The only changes to the last version was to increase the thickness for slightly less wobble, and an extension of the hub shaft holder.  My current spools fit, but a future spool might be larger in diameter.  The final design was printed in Prusa orange (right). 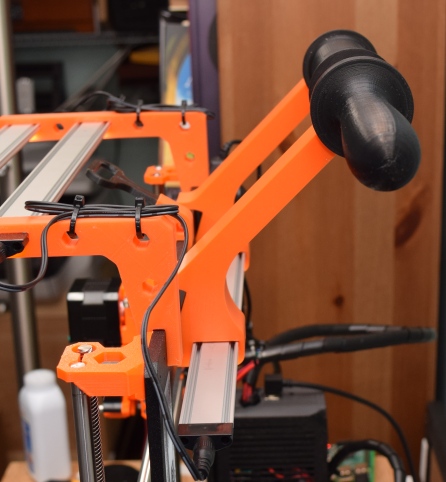 Everything fits together nicely.  The large flange on the handle keeps it from sliding up your hand, and aids in alignment.  My LED strip slides in its slot with a little wiggle room.  The uprights can move if need be, but are in a good place.  The center hub is wide enough to accommodate a large range of spools.  I think this will be a great holder for a long while (until 5 minutes after this post when I run into an issue with it!).

This should be compatible with any of the Prusa i3s.  I think the MK1, 2, and 3s all have the same size and shape frame.  If I am wrong on that, then this only works for the MK2.  I uploaded it all to thingiverse.

As a bonus, it is holiday time, and that calls for cookies.  Cookies that come in fancy shapes taste better than normal ones.  True fact!  Add some pizzazz to your holiday gathering.