I was a bad woodworker and bought a set of adirondack chairs.  Yeah I know shameful.  In my defense they were really cheap and reasonably comfortable.  They are going to sit on the porch with the buns and they are just going to chew it half to death anyways.  I felt we needed a few accessories to go with the zazzy new chairs.  First, a cup holder!

Being that they are wooden chairs I can screw or glue anything I want to them!  I took a 3 inch hole saw and made a cup sized hole biased slightly to the one side of a board.  I used my largest forstner bit to make a depression for the cup to sit in.  Unfortunately even my narrow based pub glasses were too big, so I ditched that part.  A bit of sawing and sanding later and I had a notch for my coffee mug handles to fit into.

I made two sets and attached them to the end of the arm rest on each chair.  A spare block added more distance between the top retainer ring, and the base.  I did some shaping with saws, spokeshaves and sanders to get something a little curvy after the fact.  Not exactly gorgeous work, but it does a great job of holding your drink!

The arms on an adirondack are supposed to be mega wide for holding spare items like drinks and plates.  I got the drinks covered, but a side table would be helpful.  I had some spare pine lying around so I put it to good use.

Speaking of good use, I made use of my dividers and compass.  The dividers helped center up the upright board quickly, then the compass made some pleasing curves for the band saw.  The top sections turned out great, but the feet are a little awkward.  I still have a lot to learn about curves and proportions. 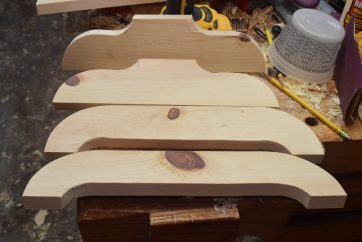 I assembled everything with screws because it was quick and this is going to see a lot of abuse on the porch from rabbits and spilled food.  Not exactly fine furniture. 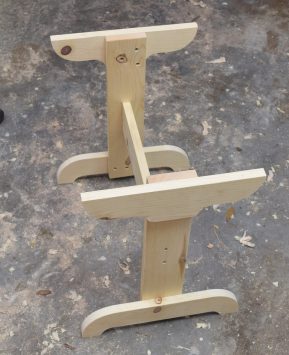 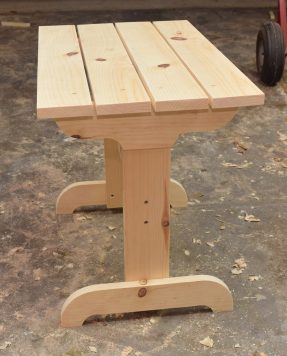 Though not fine furniture, it looks really good considering it is about 15 dollars of pine, and a single evening of work.  It will hold our plates and various other outdoor items for years to come.  That is assuming the buns don’t chew it down first.