Living in the land of sunshine can have its downsides.  One is the summers here.  It is still super hot here, though I think we are done with the 90+ degree days for the year.  The other issue is hurricanes.  I had a loose setup of batteries on an ups to provide 12V power for charging phones and whatnot.  It was kind of a mess and the batteries were pretty well shot.  Our most recent hurricane scare pushed me into action.

I wanted something more compact and organized with greater capability than my first setup had.  I am making two boxes to use as general sturdy hurricane supply storage.  A third box will house a deep cycle battery and have some tricks up its sleeve.  Everything is made out of either 1/2 or 3/4 inch plywood.  These all got assembled and painted at the same time I was building my bee cabinet.

Once the painting was complete I started assembling the battery box.  First I used cleats to kind of clamp in the battery a bit.  It can still move vertically, but I don’t ever plan on flipping the box over.  The charger goes in the back, with its cord coming out the side of the box.  A divider keeps most things away from the battery and allows for some storage space.  Next came a terminal block screwed to the roof, and a switchable panel voltage meter.  This will let me monitor the voltage during charging and operation.  Next came some 12V car power sockets so I can plug in all my accessories when I need them.  Finally I stuck some black plastic HDPE over the terminal block to keep anything from accidentally shorting. 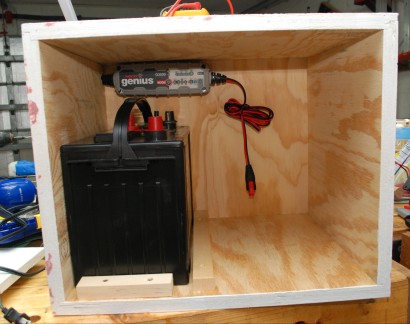 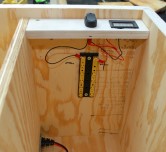 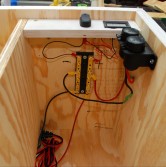 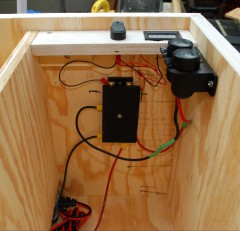 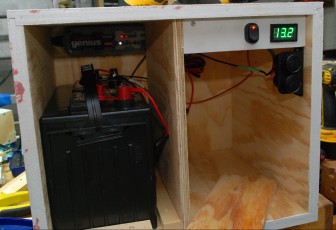 Once I had that all wired up and tested out I put in a front divider to make the lower right area a storage bin of sorts.  It holds a 12V fan, inverter, USB phone charger, and a special LED light box. 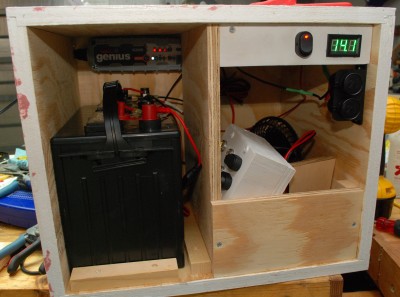 Speaking of light box, here it is.  I found some bright LED car lights that run directly from 12V.  They got installed in a custom box with switches and a 12V car plug.  Now I can plug these in and use either 2 or 4 lights to help light up a room during a power outage. 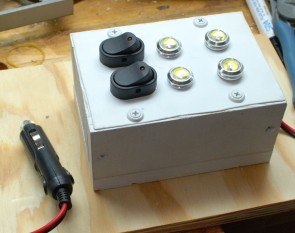 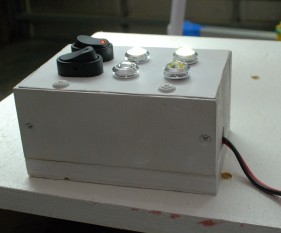 With all the innards assembled I put hinged doors on all the boxes and some beefy folding handles.  The battery box got a locking mechanism to keep the doors closed.  The battery box is really heavy.  To help with hauling around the house I screwed it to a small fold up hand truck.  This means that just about anyone can move it around the house without causing a hernia. 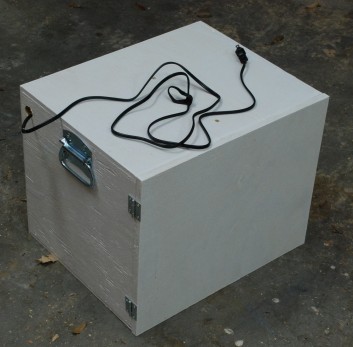 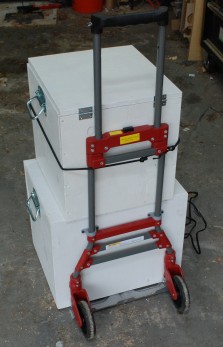 The two storage boxes are about 14 per side on the inside.  The size worked out pretty well.  One holds a pile of expandable 5 gallon water containers.  I figure instead of trying to buy water ahead of each storm or season, I can just bottle it myself right before a storm hits.

The other box carries a wide variety of odds and ends including solar cells and a charging circuit to charge the deep cycle up, candles, matches, other fire starters, soap and disposable bowls/utensils, playing cards, a weather radio, lantern, and other odds and ends worth keeping around. 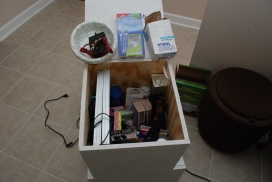 Everything you could need and more 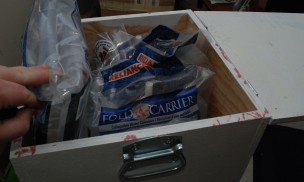 Now that I have gone to all this trouble and expense to be really prepared, we probably wont have the power go out for many years.  Wouldn’t that be nice!