I purchased an Anova cooker a few weeks back, on their father’s day sale, and have been sous videing up a storm.  Is that how the verb form works, sous videing?   At any rate the unit is quite impressive.  It can heat up a large quantity of water quickly, and keeps it at a very stable temperature.

Initially it was a few degrees low compared to two different meat thermometers I had.  Luckily there is a straight forward way to alter the calibration.  See the instructions for details. 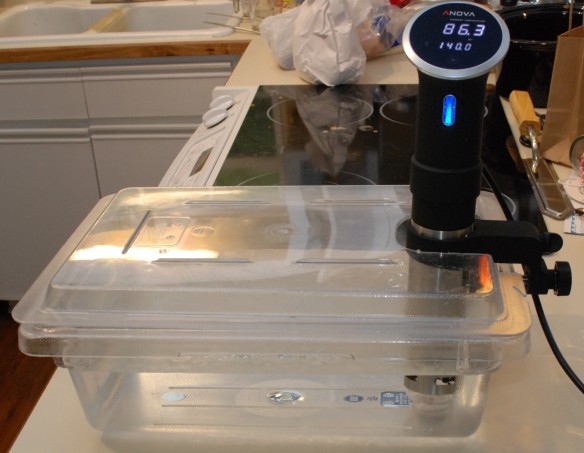 One interesting thing is that unlike big professional models, this one is placed in a container of your own choosing.  I have used two different crock pots, and a large polycarbonate container to cook in.  That makes it really flexible for doing either two pork chops, or a pile of food.  I clocked the unit while it was heating up these various amounts of water and came up with a few pre-heating times.  Times will vary depending on container and starting temp of the water.  Around here it is nearly 80º.

8 quarts is a pretty good amount of water to heat up that quickly.  I was surprised.  In my first run with the full sized polycarbonate bin I filled it to the max.  A good sale at my local market resulted in a pile of chicken and pork chops.  I pre-seared the pork chops and some chicken before they went into the bath.  The rest of the chicken got various marinades.  I was able to fit 10 pounds of chicken (before trimming) and 8 big pork chops in the large container.

In all I have cooked chicken breasts, pork chops, pork tenderloin, buffalo burgers, scrambled eggs, and steaks in the sous vide.  Everything, eggs somewhat excluded, has turned out to be some of the best I have ever made.  I would highly recommend this method to anyone interested in taking the plunge.

This unit is great with the slight exception of their interface.  Setting a temperature is easy enough, but calling the timer setting process convoluted is being generous.  The unit has bluetooth and the app is ok, but thats about it.  Setting times and temp requires a lot of scrolling.  It is a minor annoyance, but I feel like it could have been much better.  Still, for the sale price I love this thing!