I used Monica’s grandfather’s brace to drill the holes in her yarn swift.  It worked well, and I felt it needed a cleanup.  I have been picking up a few things from ebay recently, and am falling into an old tool refurbishment tear.  There are probably more to come.  First, the before shot. 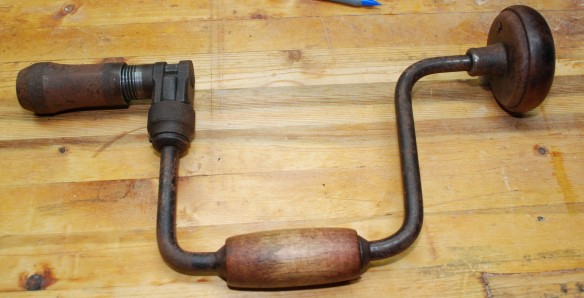 Very dirty looking, but still in working order.  I started by taking the chuck out and the head (mushroom shaped thing you push against) apart.  The ratchet portion is riveted together and the center spinner handle is not removable.  A few trips through the Krud Kutter (or as I call it now The Green Machine) got all the rust converted on the ratchet portion and the head area.  I didn’t want to dunk the center handle, so some naval jelly was brushed onto the rest of the tool.

With all the rust converted I tried doing a bit of scrubbing with a scotch brite pad.  It helped clean up the darker areas, but wasn’t getting as far as I wanted.  On a whim I decided to try the brass brush on my bench grinder.  WOW!  What a result.  It takes the grime and converted rust off and leaves a really clean looking surface. 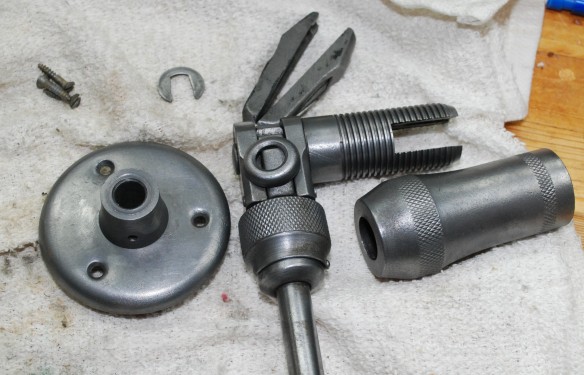 Before I started cleaning I spent some time trying to identify the brace.  I couldnt see any markings on it, and went as far as posting it on reddit to beg for help.  Low and behold once I got the rust removed and cleaned off, the maker’s marks appeared.

The first part was worn off before I started in with the brass brush.  The text reads

MILLERS FALLS CO. NO 1710
GREENFIELD MASS MADE IN USA

I did some research and based on the model number and jaw type, it has to be newer than 1949.  We know that her grandfather built a house in the early 50s, so my guess is that it was purchased around then.  Another interesting history fact is that the handles appeared to have been painted red at some point, probably originally.  The underside of the head was left red, and some tinges of red were left on the center handle.  They either wore away or were removed and varnished sometime in the past.  I sanded off a majority of it and recoated them with boiled linseed oil. 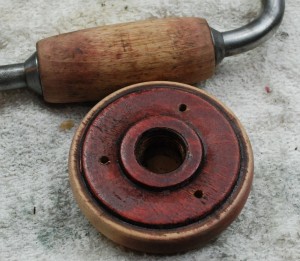 With the wood preserved I re-greased the bearings at the head, oiled everything up and hit it with a protectant spray.  The final results are gorgeous.  It has some of the original scratches and a hint of the red is left over in the handle.  You wouldn’t ever mistake it for new, but it surely does look gorgeous.  Now that I am keeping it oiled and protected the tool should last another 60 years at least.